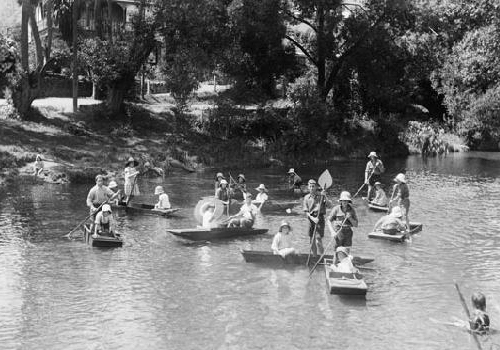 From the low lying reaches near the sea to the headwaters high in the Bryant Range, the Maitai River has been one of Nelsonian’s favourite recreation places for many generations.

Long before a road reached Smith’s Ford and The Forks beyond, families had whares or baches up the valley, reached on horseback via track and riverbed. Many a youngster was introduced to the adventurous world of hunting, fishing and camping up the Maitai.

Barbara Currie’s story of the Charles Kidson whare in the 1940s:

The lower reaches were the local backyard playground while the swimming holes – Girlies, Denne’s, Black and Sunday were the official ‘swimming baths’ of Nelson schools. River banks would be crowded with spectators on official Sports Days but none as unusual as a 1937 visitor…

‘Nelsonians going home to lunch yesterday were somewhat surprised to see an elephant feeding by the Maitai River. Jumbo, a member of a circus now on a visit to Nelson, fed on unconcernedly, apparently enjoying his brief freedom.’

The Maitai continues to hold a special place in Nelsonian’s hearts, especially for Project Maitai/Mahitahi, a joint community, Council and Iwi initiative that aims to improve the health of our river so that people can safely swim, take kai, enjoy and be proud of!

While the growth of the city has impacted on the river’s health, it is the damming of the river in the 1980s to provide water for the city’s growing population that has had the most dramatic effect. However, local freshwater ecologist Roger Young says the Maitai is still relatively healthy, as he says:

“There aren’t too many urban rivers around that you would think about swimming in.”

As a recent English visitor commented, when viewing the river:

“This is what I remember the river being like on our farm when I was a kid, some 20 years ago. But today our river back home is all brown and dirty and no one goes swimming there now.”

The river’s name – Maitai / Mahitahi is a very old Maori name, referring to one particular Mai or matai (black pine) which once grew on the banks of the river and fruited abundantly in season.